I don’t like too much makeup on the females i find attractive,so needless to say what we are seeing now is turning me off! Let’s get to it,let’s call it what it is.Females are lazy now and refuse to put in the work like they use to,this goes for females all over the USA and not just black females. What happened to the woman from the back when the more natural you looked,the better you looked?!?

I long for days when i can see a sista that has NO MAKEUP on and is just as beautiful as can be,that turns me on like nothing i have ever seen. I used to love when a woman could wake up in the morning and not do too much to her face and go to work or shopping.I use to love to be able to kiss a girls with no lipstick on and not have to worry about wiping it off my lips.Our females have lost their minds. Everything is fake now,nails,eye lashes,hair,titties,booty,nose,lipps (a few)eyes. I’m waiting for the next big fake thing to take over their minds again. Sungod64

Loreen Williams was working as a beautician in 2012 when her boss gave her his wife’s business card, explaining that the woman was a doctor who specialized in butt injections.

“I was like, you know what, my booty’s drooping,” said the Yonkers resident. “So I picked up the phone and called the lady.”

Days later, Williams was splayed out on her own bed, getting injected with a jelly-like substance by a stranger. There were no intake forms and no prep — the injector arrived, pulled out a bag of needles and got to work.

“She told me that she was a doctor, and that the silicone was from some hospital where she works,” said Williams, who later learned the woman was not a doctor.

As the woman began the injections, “I thought, ‘Oh my God, what am I doing?’ ” said Williams, 44. The injections were painful. “You can feel that the stuff is not supposed to be there.”

Still, she said, “it looked amazing on me.” So amazing that her sister and then-21-year-old niece booked the same procedure.

But within a year or two, Williams was growing easily fatigued and experiencing pain around her knees. “I was like, ‘I’m not that old yet,’ ” she said.

Her butt had begun to hurt, too: “If I sat too long, it felt like fire.”

At night, when the pain kept her awake, she would search her symptoms online, looking for answers. What she came across were multiple stories from other women who’d had similar symptoms after getting back-alley injections. The silicone, she realized, had over time caused her skin and muscles to harden, turning her rear end into a bumpy, lumpy mess.

In September 2018, after years of pain, she finally had the silicone taken out by Dr. Tansar Mir, a plastic surgeon on the Upper East Side.

“He pretty much saved my life,” she said.

Williams is one of many women — often driven by a desire to look like Kim Kardashian — who have found themselves victims of butt lifts gone wrong.

Although these procedures have been popular since the early aughts, horror stories are only now beginning to surface. 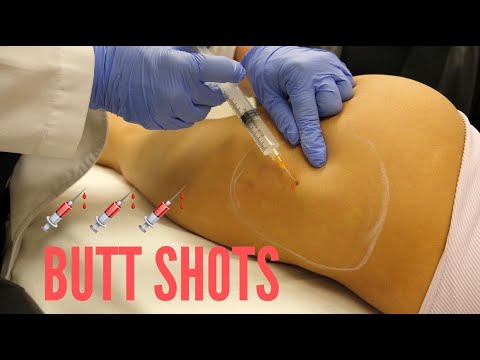 In a 2018 interview with GQ, rapper Cardi B copped to getting back-alley enhancements in a Queens basement four years ago. She told the mag that the injections “leaked” for five days, and when she went to schedule touch-ups, she learned that the injector had been jailed after someone died on her table.

La­tesha Bynum, a 31-year-old Harlem woman, died in 2017 from complications related to a procedure conducted at an unlicensed facility in Gramercy.

Kevin Richardson, who ran the operation, was sentenced to four to 12 years in prison after pleading guilty to second-degree manslaughter and three counts of unauthorized practice of a profession.

In January, a Bronx woman, Whalesca Castillo, was charged with homicide after Lesbia Ayala, 48, died in December 2018 following an unsanctioned procedure.

The medical examiner ruled that Ayala, who suffered a heart attack at Castillo’s Castle Hill home, had died of “systemic silicone embolism syndrome” due to “cosmetic-silicone injections of buttocks and thighs.” (Castillo is awaiting trial.)

Castillo had previously been arrested in 2011 for injecting illegal silicone — at $1,000 per treatment — and sealing the wounds with Krazy Glue. After serving a year in jail, she was busted again in 2012.

News of deaths and arrests surface every few months, but there has yet to be a comprehensive crackdown on the procedures. The American Society of Plastic Surgeons reported more than 25,000 legal butt augmentations performed in 2017, but does not track illegal procedures. Dr. Mir estimates that there are around 100,000 Americans with dangerous injections that need removal. 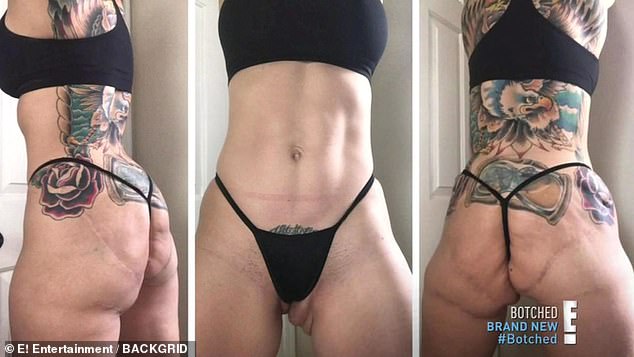 His patients have typically been injected by unlicensed, unregulated practitioners — often with no medical training — in their own home or at the injector’s home, paying $1,500 or so for a plumped bottom. Most have experienced pain, exhaustion, a weakened immune system and immobility, but sometimes not until years after the enhancements.

If Williams hadn’t opted for surgery, the muscle and skin of her butt and hips would have continued to harden and discolor, growing progressively worse. “In severe cases,” said Mir, “these wounds can get infected, and patients can get sepsis and die if they don’t seek proper medical care.”

For butt-implant patients lucky enough to survive, revision surgery and recovery takes a grueling six weeks under a doctor’s care.

“I don’t think I’ll ever fully be back [to normal],” said Williams, “but I’m most of the way.” As for the woman who injected her, Williams added, “I don’t know why anyone hasn’t arrested her yet.” 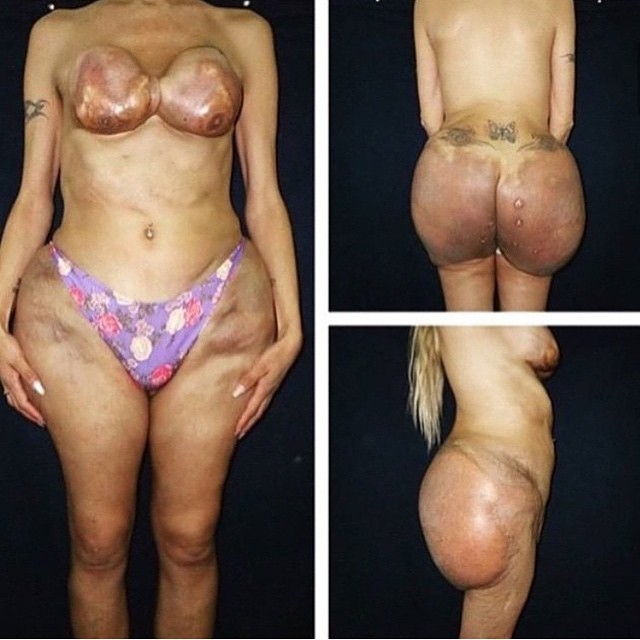 Asked by The Post if she planned to file a report with police or the city Health Department, Williams said she didn’t realize she could.

The hush-hush nature of these underground procedures means it’s largely a word-of-mouth business, with clients telling friends, who tell their friends, and on and on. But that can also lead to a lack of sharing information that could save lives.

Mir said, “I have worked with the FDA and Department of Justice in the past and do offer patients the opportunity to speak to such authorities. However, most people don’t choose to do so, mostly out of embarrassment and wanting to maintain privacy.”

Mir stumbled across his career-defining niche in 2012, when he consulted on a patient in ­Lenox Hill Hospital’s ICU. 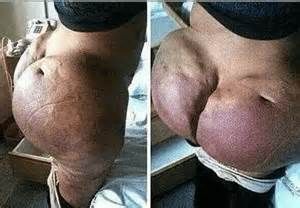 The woman, who had come in a week earlier complaining of heart troubles and intense fatigue, was getting sicker and sicker — with frozen butt muscles, dead tissue in her legs and an immune system in rapid decline. It turned out to be related to a silicone butt injection from years earlier.

“People couldn’t figure out what was wrong with her,” said Mir. “No plastic surgeon was willing to help, because they had no experience with bad injections — it isn’t taught in med school.”

He helped save her, and later teamed up with fellow Upper East Side plastic surgeon Dr. T.Y. Steven Ip to develop a multi-stage removal technique, and teach it to other plastic surgeons.

The two now say 15 percent of their cosmetic practices — which includes legal butt-lifts — focus on correcting what they see as a rapidly growing epidemic: illegal butt injections that turn life-threatening. 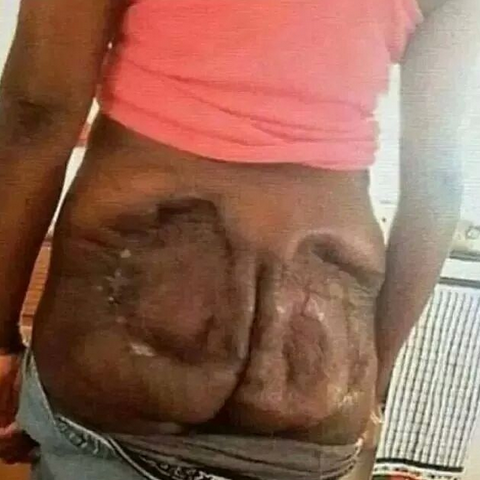 Ip, who also practices in tony Newport Beach, Calif., said that a butt-lift can be a safe procedure as long as it’s performed the right way — using a patient’s own fat or a sealed silicone implant. “The problem is that people are using silicone jelly, and it’s not even medical grade,” he said. Often it’s bought at hardware stores.

“If it is injected into fat, the fat will turn hard and even calcify, leading to distortion of the surrounding area,” Ip said. “If it is ­injected into muscle, the muscle becomes hard and scarred, which leads to motor and movement issues.”

Plus, Mir added, black-market silicone is rarely sterile, which can lead to life-threatening ­infections.

“People want a quick fix,” said Ip, adding that most of his and Mir’s revision patients are in their late 20s to 40s, and roughly 80 percent female, 10 percent male and 10 percent transgender.

People also want a cheaper fix. A fat transfer, often called a Brazilian butt-lift, by a ­licensed plastic surgeon costs roughly $15,000 and usually requires a period of weight gain and recovery, whereas injections take less than an hour.

The legitimate version comes with risks, too: The American Society of Plastic Surgeons estimates the procedure’s fatality rate to be as great as 1 in 3,000 — much higher than other surgeries — and in 2018 formed a Task Force for Safety in Gluteal Fat Grafting in order to develop better guidelines. The doctors say that opting for injections over a transfer of fat adds to the danger.

“When people suffer a fatality, a lot of times it’s because someone injected too deep or in the wrong spot and it hits a vein, and goes into the bloodstream or lungs,” said Ip. “You’ll get a fat embolism and die on the spot.” Other issues stem from the silicone moving — a common issue when liquid silicone is injected indiscriminately.

Alisha, a 37-year-old from Essex County, NJ, started to feel ill immediately after receiving injections in a stranger’s home in 2010. (She was told by the woman that the substance was medical-grade hydrogel and later learned it was liquid silicone.)

In 2018, Mir was able to remove most of the silicone — which had migrated from her butt to her ankles — but not all. Her high heels are never to be worn again, and she has resigned herself to a life of baggy pants. But, Alisha added, she knows she’s lucky to be alive.

Still, Dr. Mir sees no signs of a slowdown. He recently treated a patient who had seen him on TV, talking about bad injections three years ago — but still opted for her own ill-fated procedure this past year.

“Word is getting out, but it’s not stopping people,” said Mir, adding that even if someone with a black-market butt job has no scary side effects yet, they can happen as long as a decade or two after the procedure was done.“It’s like a ticking time bomb.”

I don’t know where sistas got this thing about NOT having or having a big butt!Not having a big butt DOES NOT DISQUALIFY YOU FROM BEING FINE,BEAUTIFUL,SEXY AND GORGEOUS! We will love you,lust for you,admire you and praise you regardless of the size of your ASS! Sungod64

This site uses Akismet to reduce spam. Learn how your comment data is processed.

All about Everything! I'm not a writer,i just blog some times, you can get my e-book The Threat at Amazon/Kindle.Please Like and subscribe to my Blog!

A blog and podcast on hip hop in Africa

Your one stop for all news Africa: From Politics to Entertainment, Lifestyle and Cultural events, we have it all covered. From Nigeria, to Ghana,Uganda,Kenya and beyond. We bring news from around the continent, to your finger tips. Also, Checkout our New Youtube channel: WAKEUPAFRICA360TV